In this tutorial we'll go through a simple example of how to implement role based authorization / access control in a .NET 5.0 API with C#. The example builds on another tutorial I posted recently which focuses on JWT authentication in .NET 5.0, this version has been extended to include role based authorization / access control on top of the JWT authentication.

The example API has just three endpoints/routes to demonstrate authentication and role based authorization:

To keep the api code as simple as possible, it is configured to use the EF Core InMemory database provider which allows Entity Framework Core to create and connect to an in-memory database rather than you having to install a real db server. This can be easily switched out to a real db provider when you're ready to work with a database such as SQL Server, Oracle, MySql etc. For an example api that uses SQLite in development and SQL Server in production see .NET 5.0 - Simple API for Authentication, Registration and User Management.

The tutorial project is available on GitHub at https://github.com/cornflourblue/dotnet-5-role-based-authorization-api.

NOTE: To find out how to easily launch the API in debug mode with VS Code see VS Code + .NET - Debug a .NET Web App in Visual Studio Code and skip to the step: Generate tasks.json and launch.json.

Test the .NET API with Postman

Below are instructions on how to use Postman to authenticate the "admin" test user to get a JWT token from the api, and then make an authenticated request with the token to retrieve a list of users from the api.

Screenshot of Postman after the request is sent and the user has been authenticated: 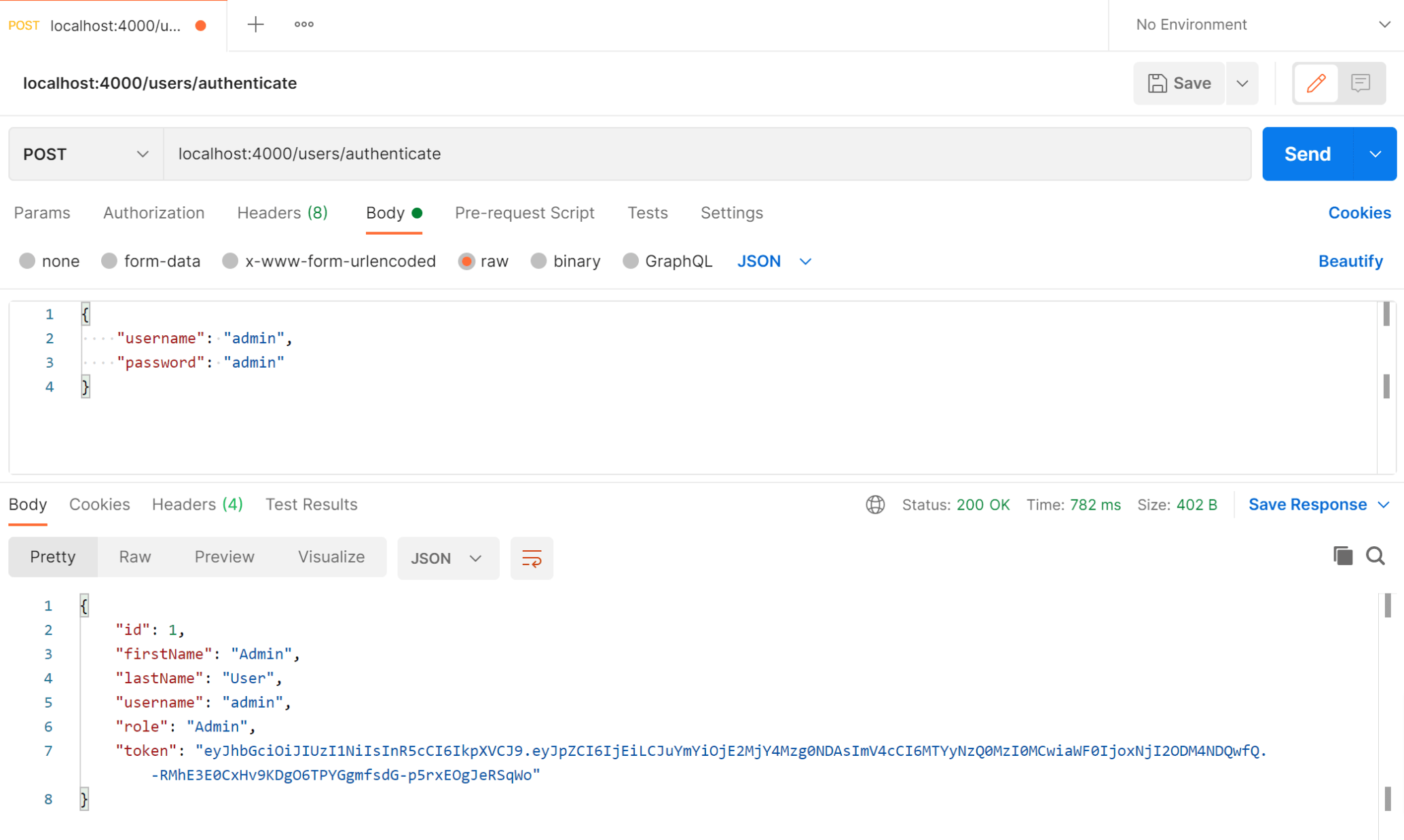 NOTE: This route is restricted to users in the Admin role, other users will receive a 401 Unauthorized response.

Screenshot of Postman after making an authenticated request to get all users:

Run an Angular client app with the .NET Role Based Auth API

For full details about the example Angular application see the post Angular 10 - Role Based Authorization Tutorial with Example. But to get up and running quickly just follow the below steps.

Run a React client app with the .NET Role Based Auth API

For full details about the example React application see the post React - Role Based Authorization Tutorial with Example. But to get up and running quickly just follow the below steps.

Run a Vue.js client app with the .NET Role Based Auth API

For full details about the example Vue.js application see the post Vue.js - Role Based Authorization Tutorial with Example. But to get up and running quickly just follow the below steps.

The tutorial project is organised into the following folders:

Authorization
Contains the classes responsible for implementing custom JWT authentication and role based authorization in the api.

Controllers
Define the endpoints / routes for the web api, controllers are the gateways into the web api for client applications via http requests.

Entities
Represent the application data that is stored in the database.
Entity Framework Core (EF Core) maps relational data from the database to instances of C# entity objects to be used within the application for data management and CRUD operations.

Helpers
Anything that doesn't fit into the above folders.

I created a custom allow anonymous (instead of using the built in one) for consistency with the custom authorize attribute and to avoid ambiguous reference errors between namespaces.

Authorization is performed by the OnAuthorization method which checks if there is an authenticated user attached to the current request (context.HttpContext.Items["User"]) and that the user is in an authorized role (if specified).

The custom JWT middleware extracts the JWT token from the request Authorization header (if there is one) and validates it with the jwtUtils.ValidateToken() method. If validation is successful the user id from the token is returned, and the authenticated user object is attached to the HttpContext.Items collection to make it accessible within the scope of the current request.

If token validation fails or there is no token, the request is only allowed to access public (anonymous) routes because there isn't an authenticated user object attached to the HTTP context. The authorization logic that checks if the user object is attached is located in the custom authorize attribute, and if authorization fails it returns a 401 Unauthorized response.

The GenerateJwtToken() method returns a JWT token that is valid for 7 days, it contains the id of the specified user as the "id" claim, meaning the token payload will contain the property "id": <userId> (e.g. "id": 1). The token is created with the JwtSecurityTokenHandler class and digitally signed using the secret key stored in the app settings file.

The ValidateJwtToken() method attempts to validate the provided JWT token and return the user id ("id") from the token claims. If validation fails null is returned.

If roles are specified in the authorize attribute (e.g. [Authorize(Role.Admin)]) then the route is restricted to users in the specified role / roles.

The GetById(int id) action method contains some extra custom authorization logic which allows admin users to access any user record, but only allows normal users to access their own record.

The role enum defines all the available roles in the example api. I created it to avoid passing roles around as strings, so instead of 'Admin' we can use Role.Admin.

The user entity class represents the data for a user in the application. Entity classes represent the core data of a .NET app and are commonly used with an ORM such as Entity Framework to map to data stored in a relational database (e.g. SQL Server, MySQL, SQLite etc). Entities are also used to return HTTP response data from controller action methods and to pass data between different parts of the application (e.g. between services and controllers). If multiple types of entities or other custom data is required to be returned from a controller method then a custom model class should be created in the Models folder for the response.

The PasswordHash property is decorated with the [JsonIgnore] attribute to prevent it from being returned in API HTTP responses.

Mapping of configuration sections to classes is done in the ConfigureServices() method of the Startup.cs file.

options.UseInMemoryDatabase() configures Entity Framework to create and connect to an in-memory database so the API can be tested without a real database, this can be easily updated to connect to a real db server such as SQL Server, Oracle, MySql etc. For an example api that uses SQLite in development and SQL Server in production see .NET 5.0 - Simple API for Authentication, Registration and User Management.

The global error handler is used catch all errors and remove the need for duplicated error handling code throughout the .NET api. It's configured as middleware in the Configure() method of the project startup class.

Errors of type AppException are treated as custom (app specific) errors that return a 400 Bad Request response, the .NET built-in KeyNotFoundException class is used to return 404 Not Found responses, all other exceptions are unhandled and return a 500 Internal Server Error response.

See the user service for examples of custom errors and not found errors thrown by the api.

The authenticate response model defines the data returned by the Authenticate method of the users controller after successful authentication. It includes basic user details and a JWT token.

The Authenticate() method finds a user by username and verifies the password against the hashed password in the database using BCrypt, on success the user details are returned with a JWT token. For more info on hashing and verifying passwords see .NET 5.0 - Hash and Verify Passwords with BCrypt.

The Main() method is the entry point for a .NET application, when an app is started it searches for the Main() method to begin execution. The method can be located anywhere in a project but is typically placed in the Program class.

A .NET web app is run within a host which handles app startup, lifetime management, web server configuration and more. A host is created and launched by calling Build().Run() on a host builder (an instance of the IHostBuilder interface). A generic host builder with pre-configured defaults is created with the CreateDefaultBuilder() convenience method provided by the static Host class (Microsoft.Extensions.Hosting.Host).

The x.UseStartup<Startup>() method specifies which startup class to use when building a host for the web app.

The .NET host passes an IApplicationBuilder to the Configure() method, all DI services are also available to Configure() and can be added as parameters to the method (e.g. public void Configure(IApplicationBuilder app, DataContext context) { ... }). For more info on the startup class and both configure methods see https://docs.microsoft.com/aspnet/core/fundamentals/startup.

The createTestUsers() method is executed on startup to create a couple of users in the in-memory database for testing.